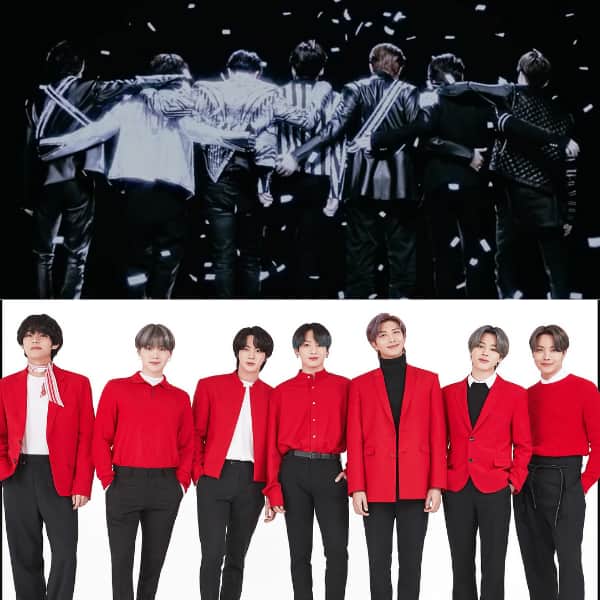 A couple of hours ago, Bangtan TV dropped a BTS of BTS’ MAP OF THE SOUL ON:E CONCEPT PHOTO BOOK. For the unversed, BTS’ MAP OF THE SOUL ON:E for a pay-per-view concert, one of its kind concert, that streamed in October 2020. BTS conducted a photo shoot for the same. And in the video, we saw the septet talking about their shooting experience and the difference of releasing an album, the concept photo book in pandemic time. There were several shoots conducted which you can see throughout the video. Let’s begin with the first shoot which is about their performance. Also Read – BTS’ RM finally REVEALS why he got Pink hair after saying that he would NEVER do it again

The first day of the photoshoot for MAP OF THE SOUL ON:E CONCEPT PHOTO BOOK saw the septet in all-black and glittery outfits as though they are performing on stage for the ARMY. After shooting for the same individually and collectively, the boys gave their individual take on the shoot. There was the usage of a lot of confetti to make it look like a real on-stage concert performance which turned boys nostalgic. Right from V, Jin, Jimin, Jungkook to Suga, J-Hope and RM, the boys recalled how they would perform in front of the ARMY and have fun all the while. The boys kept on saying how they missed ARMY and performing on stage and also assured them that this tough phase (pandemic) will pass. It was quite emotional for the BTS boys, one can tell. Also Read – BTS’ V aka Kim Taehyung’s HOT pictures will leave female ARMY drooling

The next photoshoot was natural or being oneself wherein the boys shot in simple white shirts/ outfits. Jungkook was paired with J-Hope and RM while V aka Kim Taehyung shot with Suga and Jimin shot with Jin. The third photoshoot saw the boys shooting with a red background. They were all dressed in black and had black cloth to help them shoot/express their emotions. It was an interesting shoot with projector lights as well. Last but not the least, BTS shot for an interesting concept wherein each bandmate brought out their unique personalities. While Taehyung aka V shot for a childlike theme, Jin turned Prince. Basically, they tried to depict different emotions that underline the main theme of their album. Watch the wholesome video below: Also Read – BTS: Find out what RM, V, Suga, Jin’s names mean in Korean – view pics