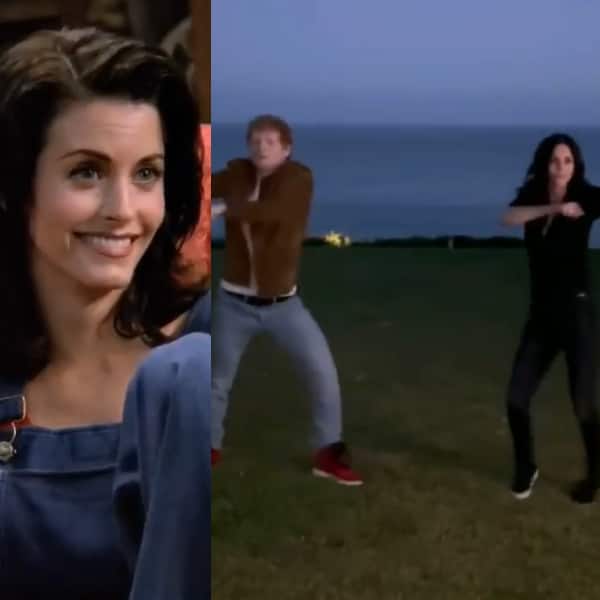 FRIENDS reunion has created immense buzz on social media. The six friends who made us laugh, cry, love and feel many more emotions reunited after 17 long years and left everyone deep in nostalgia. Jennifer Aniston (Rachel), David Schwimmer (Ross), Matt LeBlanc (Joey), Lisa Kudrow (Phoebe), Courteney Cox (Monica) and Matthew Perry (Chandler) made sure to give several emotional moments on FRIENDS reunion that made their fans weep. And since the buzz is still very high, Courteney Cox shared a video on her Instagram account that has left us laughing hard. Also Read – Hollywood News Weekly Rewind: BTS’ Jungkook helps staff post live shows; David Schwimmer ‘Ross’ and Jennifer Aniston ‘Rachel’ were actually crushing on each other

Courteney pulled off the routine, this time with her friend Ed Sheeran and we are laughing hard watching its end. In season six of FRIENDS there was an episode called “The One With The Routine” that had Monica and brother Ross played by David appear on Dick Clark’s New Year’s Rockin’ Eve. To gain attention, they do their ‘routine dance’ and it made many laugh hard. This time, instead of David, Courteney did the moves with Ed Sheeran and in the end, both of them fall on the floor as she hilariously jumps on him. Courteney and Ed too are laughing hard as their dance meets an epic end. She shared this video with the caption, “Just some routine dancing with a friend… @teddysphotos #ReRoutine.” Watch it here: Also Read – Shaheer Sheikh, Jennifer Winget, Surbhi Chandna – TV stars we want to see in the Indian version of F.R.I.E.N.D.S

All her friends including Kaley Cuoco of The Big Bang Theory are totally impressed with Courteney’s moves. Fans of course are dripping in nostalgia again witnessing Monica doing the routine. Can we blame them? Also Read – FRIENDS star Matthew Perry aka Chandler and Courteney Cox aka Monica are supposedly distant cousins, could it get anymore weird?

On FRIENDS reunion, many celebrities apart from the best six made a special appearance. Justin Bieber, Cindy Crawford, David Beckham, Lady Gaga, Reese Witherspoon, Korean band BTS, Kit Harrington and many more became a part of it. Indeed, it times of Coronavirus, FRIENDS reunion made some of us happy!